Q&A with Riffstrum: A global photo side hustle

Below is a lightly edited version of my conversation with Eddie Prevan, a resident of Sydney, Australia, who is one of the most prolific drone wave photographers in the world. In two years, his Instagram account @Riffstrum has grown organically to 21k followers, and he sells his prints internationally via Riptideprints.com.

Nick: What’s behind the name Riffstrum, and what is your full-time job?

For my job, I’m a building manager, and (Riffstrum) is just a hobby. Every Saturday or Sunday, I get out to the beach usually at like 6 in the morning. I always get out early because once the sun hits, it’s just white. It’s really hard to take shots.

Nick: What inspired you to start shooting waves?

Eddie: I’ve just always liked going to the beach, so it started really simple. You see the moving water, and it’s always different. Every set is different. And then every now and then, you get surfers coming through or it’s dolphins or sharks, whatever it is. Everything is different. It’s never the same shot.

Nick: How did you get into drone photography specifically?

Eddie: I used to do a bit of GoPro (video) getting the waves and stuff, and didn’t really get into the photography side of it because I just liked the action of the GoPro. But then I saw a (drone) photo on Instagram, and someone told me, “This is the equipment, come and get you one.” It was a couple of weeks before Christmas, so I said alright. Just nothing too expensive because if it falls, there goes $2k-$3k. So I just bought a run-of-the-mill DJI (in 2017) and I liked it straight away. I just wanted to do beach shots. Just water. I’ve done other stuff, but I always went back to the waves. 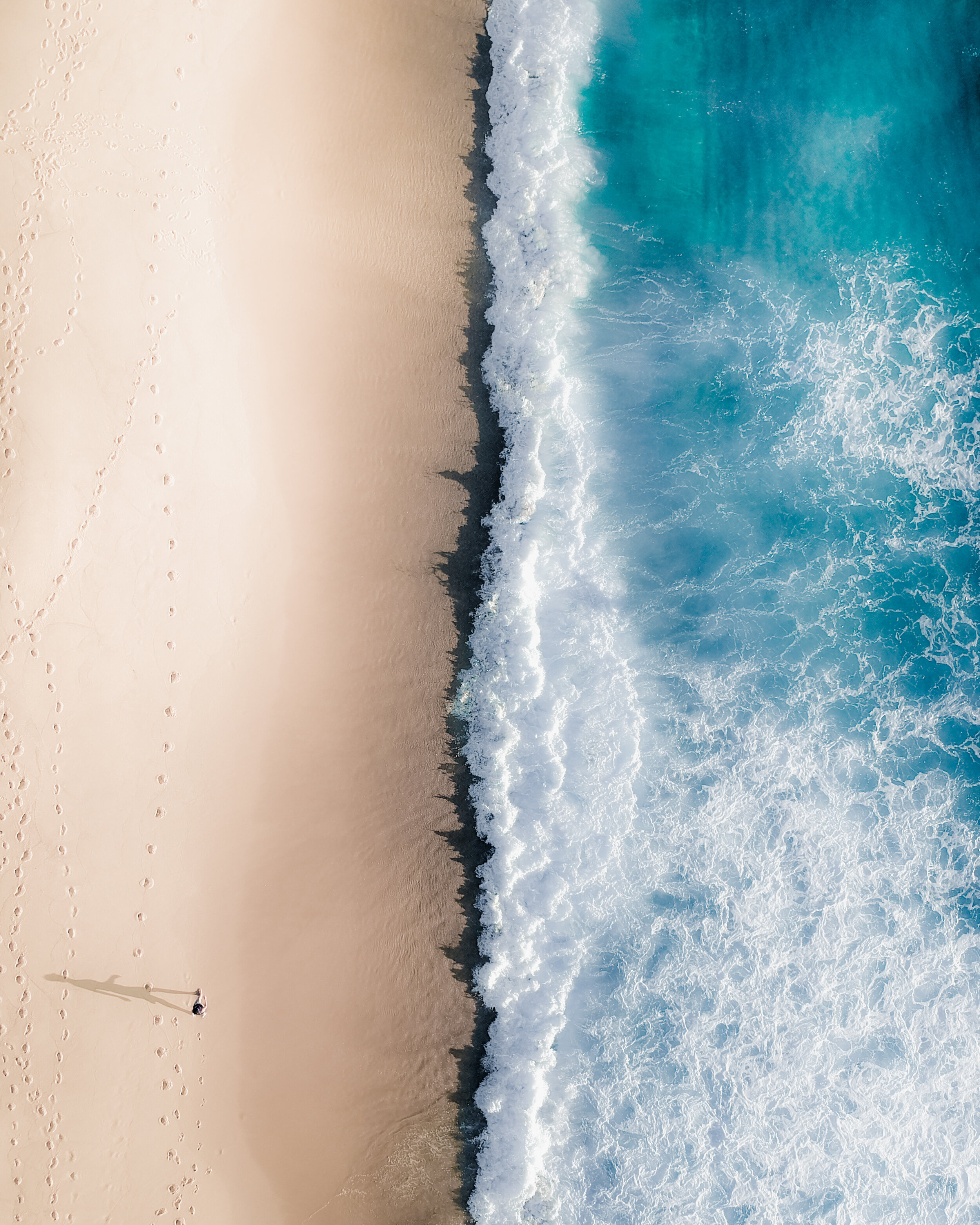 Eddie: You don’t really need to spend too much. I’ve got a DJI Spark, which is probably one of the cheapest ones. I also got a Parrot ANAFI. They sent me one last year, so I use that to take shots as well. My DJI’s battery life is 45 minutes. You’ve got to have three batteries.

Nick: Where do you shoot?

Eddie: Most of the time, I go to Bronte and Tamarama beaches. It’s kind of near Bondi Beach. I sit in the middle of the rocks, and to the left is Tamarama, and to the right is Bronte. So wherever the waves are happening, I just scoot over to the left or zip over to the right. I know I’ll get good waves there and it’s always a good swell.

We always go on the rocks because we don’t want to drone over the top of anybody, and some people get upset. That’s why you go early as well. You don’t go in the middle of the day. You don’t want to (disturb) anyone’s privacy.

Internationally, the last time I went to Hawaii, it was hard to shoot there because helicopters are everywhere and you can’t fly. And there are a lot of military zones. I went up the coast somewhere and I was like, “This is unreal, dolphins everywhere, the best break.” And then it’s just like, “Military Zone: No Drones.” It was the first sign I saw as I was driving in. I drove for an hour to get there and we couldn’t drone. So I drove back that day, but it was still awesome.

Nick: What’s the best altitude to shoot from overhead?

Eddie: I always shoot about 30-50 meters above the ocean, because if it’s a big swell, you’ll capture the whole wave. And you have to shoot in burst mode. If you’re not on burst mode, you’ll get a blurry shot. There are times that the second or third photo may look better than the first one. If the waves are breaking really nicely with good whitewash, or the water is rushing back out, that just looks really cool. So burst mode all the time.

And you’re shooting straight down because you don’t want the glare. Every now and then, you’ve got to change the exposure value up or down because your whites might be overexposed, and that looks shit. And your blues might be nice and bright, but you got to compensate either down a bit or up a bit. That’s really most of it.

Nick: Do you edit your photos?

Eddie: I use (Adobe) Lightroom. Every time you take a shot in Sydney, it’s slightly green. In Lightroom, there is a bit of work on the editing side just to make it bring up the blue hues. So normally, your sand will be kind of yellow, and the water will be green. There’s a bit of artistic license there just to get it looking the way you want. But if you go to Hawaii, man, the water’s literally blue. In L.A., shots I’ve seen, they’ve kind of got that greeny color. In South Africa and Australia, it’s all got that green tint.

Do the editing when you’re in the mood. I’ll do it for hours because I can feel it and I know everything is right. So quickly hammer out the edits, because you probably won’t be in the mood again for another three weeks.

Nick: What are the most common edits you make, and where do you draw the line?

Eddie: If you get your whites good, that’s everything in one of these shots. The first thing I look for when I look at someone else’s photos, I look at their whites, because I’ll color it – but other people color the whole ocean. You see a tint of blue or magenta or purple coming through the whites. That’s got to get eliminated.

I don’t particularly like when people Photoshop and change the background or put different clouds in. That’s digital art. I get that. But that’s not photography. I still appreciate the art in it. It takes a bit of skill. But it’s something completely different. 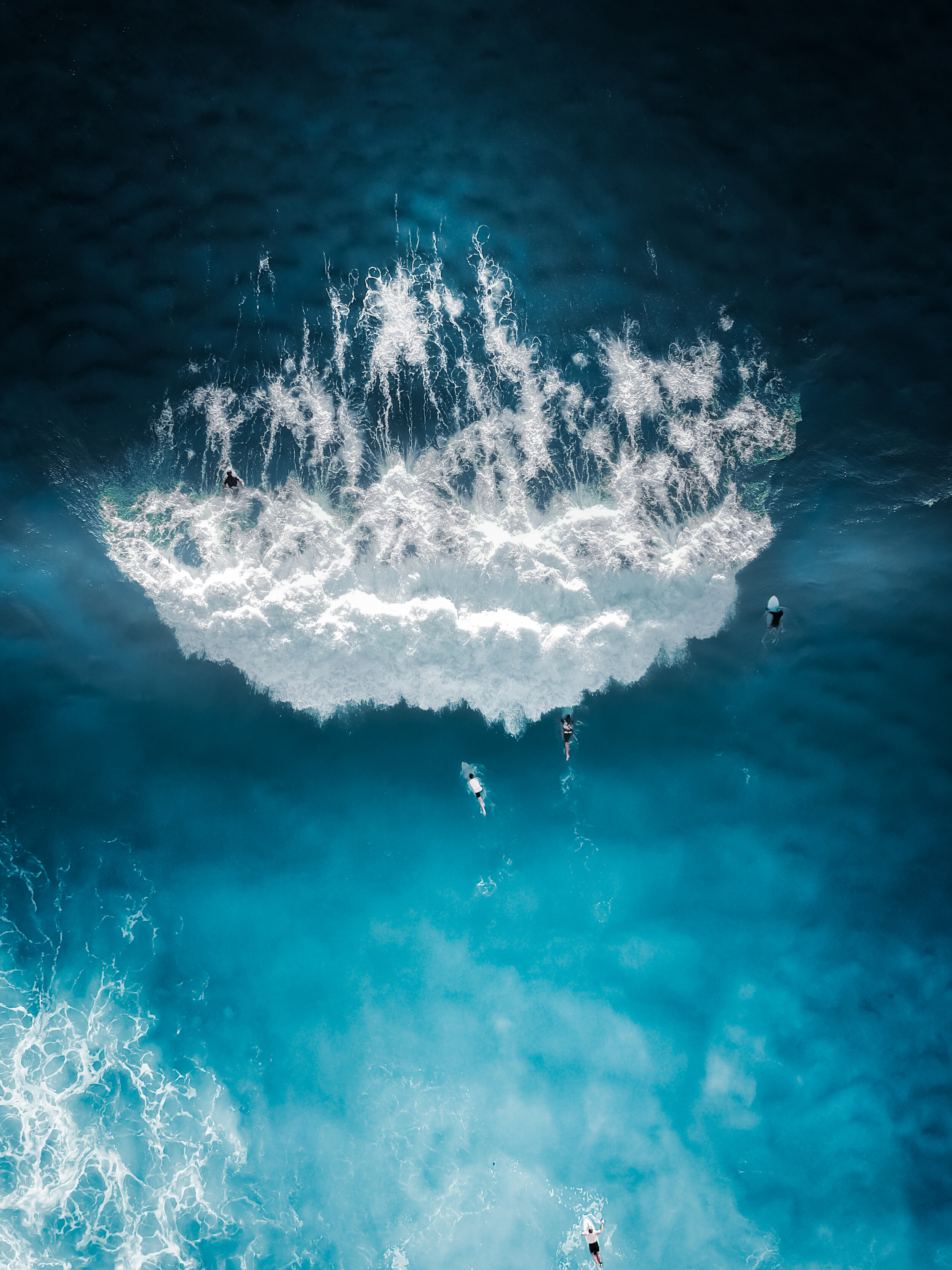 This photo is from Tamarama Beach in Sydney, Australia. Photo credit: Riffstrum.

Eddie: Everyone (in the drone community) supports everyone on Instagram. I just followed locals on Instagram, because you’d see them around. Everyone knows that if you comment on someone’s photo, it helps that photo appear in people’s Instagram (feeds). I’d comment, and they’d comment back, and everyone just kind of did that. There’s so many people from Australia that have drones that it’s pretty helpful.

“Don’t try to appeal to whatever everyone else is doing. If you’re putting up stuff that you like, you don’t care whether you get likes or not, so you don’t feel any of that pressure.”

Everyone knows the Instagram algorithm – it’s so shit. It’s so bad. I swear I was getting more hits on my shots when I had less followers compared to having more followers. It’s a weird algorithm. The peak reach I had was at 5,000 to 10,000 followers. My photos got rolled around a lot, so people got to see them. But as you get more people, it just kind of stalls, and then (Instagram) keeps asking if you want to pay for an ad or some shit like that. So it kind of sucks you in.

I think you’ve got to spend a bit of time on Instagram to make it work, and sometimes I don’t want to be on the phone all day. I just want once a week. You just need a break.

Nick: Why sell on Riptideprints instead of launching your own Shopify store or choosing a different vendor?

Eddie: They approached me ages ago and were following us early on and said, “Can we just do your photos? You don’t have to pay anything.” It’s a bit difficult dealing with people constantly asking, “Oh, can I get a photo?” There’s a long process. Whereas with (Riptideprints), they’ll print it out for you. I don’t have to worry about anything. They just send me the money at the end of the month. So that’s a lot easier. I couldn’t be bothered getting into (fulfillment).

Whatever it costs to make, (Riptideprints) keeps that, and then I get 75% of the profit. An actual print is always $150 or something like that. It’s been quite good.

I do still sell digital prints – it costs $50 –  because someone might be in Germany and they don’t want to wait for an actual print to come. Like a guy wanted to print a photo on glass, so I just sent him a digital file and he printed it out. One guy did his whole bedroom, like a whole wall. It’s one of my waves. I don’t even know he did it. He sent me a photo, I was like, “Far out, man.” He did his whole wall like a wallpaper.

Nick: What would it take for you to work on Riffstrum full-time?

Eddie: It’d be so hard to do it full-time. To do it full-time, you’ve got to make a lot of money. It’s inconsistent. No one will buy anything for two months, and then suddenly I’ll get five (sales). I reckon I earn a couple hundred dollars per month. That’s like four sales (on average).

Sometimes people pick a photo, and I’ll be like, “Really? That’s an early one.” But everyone has different tastes. Some people like a beach split – half sand, half water. Some just like calm water and some like the full wave. It just really depends. Some people will be like, “Oh yeah, I used to live in Bronte and I really like this photo and that’s why I want it.”

I get a lot of buyers from Germany, U.S. and Russia. Funny enough.

Nick: Have you ever run ads?

Eddie: No, I have never paid for anything. A local paper or somebody will ask, “Can I use this?” and yeah, that’s fine. But I don’t go out anywhere. I might enter a (photo) competition, but I don’t pay for anything. I don’t think you need it. Just throw your content out there.

Nick: What’s your advice for people who want to launch a photo business?

Eddie: For me, how I did it was just straight to Instagram. Just put up things you like. Don’t try to appeal to whatever everyone else is doing. If you’re putting up stuff that you like, you don’t care whether you get likes or not, so you don’t feel any of that pressure. So I just posted content that I like, and if people liked it, I was like, “Yeah, that’s cool, and I appreciate your support.”

I would tell people just to take photos that you like. Edit it. It’s so important to edit. If you don’t edit it, don’t even bother, man. Everyone edits, all the good ones, because you might have a shit bit of light coming from the back and it just ruins an awesome shot, or maybe it’s just underexposed and you need to bring out the light in the foreground or in the background.

Nick: Who are your favorite wave photographers?